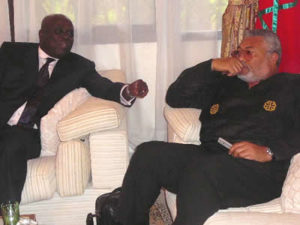 Former President Rawlings is expected to deliver the keynote address at the grand opening ceremony on Wednesday of the Africities Summit being held under the auspices of King Mohammed VI of Morocco.

The five-day summit is under theme â€œThe Response of African Local and Regional Governments to the Global Crises: Promoting Sustainable Local Development and Employment.

Organized every three years with over 5,000 participants drawn from all over Africa and other regions of the world, the Africities summit is the most recognized forum for dialogue on decentralization and local government development on the continent.

Aside giving the main address at the summit inauguration, former President Rawlings will participate in panel discussions on diverse issues to be discussed around the theme for the five-day conference.

The former President is also expected to hold a meeting with King Mohammed IV.

Initiated in January 1998 the Africities Summit is organised by the United Cities and Local Governments of Africa (UCLGA). The first summit was hosted by Abidjan (Cote dâ€™Ivoire); the second by Windhoek, Namibia and the third by Yaounde in Cameroun. In 2009 Nairobi hosted the event.

Also participating in the summit is the Okyenhene, Osagyefo Amoatia Ofori Panin II.