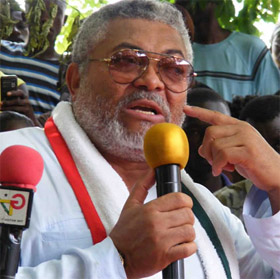 Ex President Rawlings says his incessant call for justice must not be misconstrued as an attempt to usurp the powers of President John Mills.

â€œRawlings is not after the professorâ€™s seat, nor is my wife after his seat,â€ he said.

He was speaking at the funeral of the late Northern Regional Chairman of the NDC Alhaji Sumani Zachari.

The ex-president has been very critical of the Mills administration, accusing it of failing to prosecute perpetrators of alleged human rights abuses under the erstwhile NPP.

His wife has also been in the news with a group calling on her to contest the 2012 elections.

This appears to have raised tension between the ex-first family and his followers and sitting president, John Mills.

But the ex- president said his call for justice is to ensure that perpetrators of the heinous crimes are brought to book.