Slice the plantains into rounds 1/2-inch thick, and sprinkle lemon juice over the pieces, stirring to moisten. In a separate bowl, combine the ginger and pepper. Heat about 1/4 inch of oil in a heavy skillet until a test piece of plantain sputters. Roll plantain pieces a few at a time in the spice mixture to coat surfaces, then transfer to the skillet. Fry until outsides are crisp and golden. With a slotted spoon, remove plaintains to an absorbent cloth [or paper toweling] for cooling [slightly]. Serve hot.

Boil chicken with ginger and the onion half, using about 2 cups water. Meanwhile, in a separate large pot, fry tomato paste in the oil over low heat for about 5 minutes. Add to the paste the chopped onions and tomatoes, stirring occasionally until the onions are clear. Remove the partially-cooked chicken pieces and put them, along with about half the broth, in the large pot. Add the peanut butter, salt and peppers. Cook for 5 minutes before stirring in the eggplant and okra. Continue cooking until the chicken and vegetables are tender. Add more broth as needed to maintain a thick, stewy consistency. Good served with fufu (below).

Note: Conventional west African fufu is made by boiling such starchy foods as cassava, yam, plantain or rice, then pounding them into a glutinous mass, usually in a giant, wooden mortar and pestle. This adaptation for North Americans may trouble you if you try to stick to minimally processed foods. But it’s worth trying at least once with west African groundnut stews.

Ingredients: 2 1/2 cups Bisquick 2 1/2 cups instant potato flakes. Bring 6 cups of water to a rapid boil in a large, heavy pot. combine the two ingredients and add to the water.

Procedures
Stir constantly for 10-15 minutes — a process that needs two people for best results: one to hold the pot while the other stirs vigorously with a strong wooden spoon). When the fufu is ready (or you’ve stirred to the limits of your endurance!), dump about a cup of the mixture into a wet bowl and shake until it forms itself into a smooth ball. Serve on a large platter alongside a soup or stew. 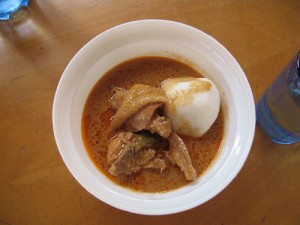 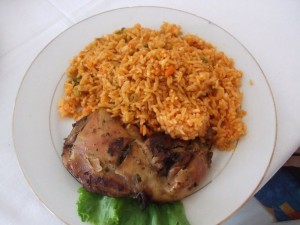 1. Wash plantain, cut ends and peel
2. Cut peeled plantain in half, lengthwise and slice, about half an inch thick
3. Marinate with chilli and ginger, and salt to taste.
4. Deep fry in hot oil at 160 C until golden brown
5. Serve hot. Can be served with roasted peanuts and finger food or black-eye beans stem. 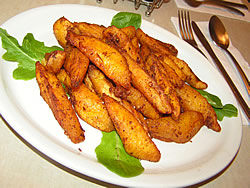 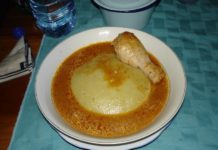