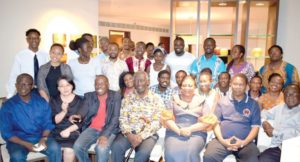 Former president John Agyekum Kufuor has urged Ghanaian students in Singapore to return home after their studies with the knowledge they have acquired and fresh ideas to contribute to the development of Ghana.

He said Singapore, which passes as one of ideal states, provided them with huge opportunities to learn and gather experiences that would help accelerate the development of Ghana.

The former President was speaking to students and some members of the Ghanaian community who called on him and the First Lady, Mrs Rebecca Akufo-Addo, after the inauguration of FPSO John Agyekum Kufuor.

“Ghana will require your expertise; some of you have finished your courses and are progressing with your PhDs, while others are also on other paths, which is encouraging,” he said.

He said the naming of the FPSO after him was a great honour, as the two former presidents did not have the opportunity of witnessing such memorable ceremonies.

Ghana, he said, should be very dear to the heart of all Ghanaians and they should collectively work towards its progress to an ideal society.

For her part, Mrs Akufo-Addo extended President Akufo-Addo’s warm greetings to them and assured them that he would work to bring about the change the New Patriotic Party (NPP) espoused.

She said Ghana had a lot of potentials that were yet to be fully harnessed to her advantage and she would need the expertise of all, including those in the Diaspora, to accelerate the process of change

To unlock these potentials as a country, she said there would be the need for all expertise to come on board.

“Don’t stay away. Come home and help your country. It is interesting that we started together with Singapore, about 50 years ago, but they are miles ahead of us,” she said.

She said the country could only bridge the gap through hard work and that the President would lead the agenda to ensure that the change would happen.

She added that it was very important to note that President Akufo-Addo was passionate about every Ghanaian and that all the issues discussed and the concerns of the students would be conveyed to him.

Earlier, the Chairman of the Ghanaian Community in Singapore, Mr Dennis Abbey Quaye, appealed to the government to use diplomatic means to negotiate some relief for Ghanaian students pursuing high education.

He said after completing their master’s programmes, most students wanted to stay, work and complete PhD but “they are not allowed.”

“We are not asking government to tell the Singaporean authorities to offer jobs to our graduates, but we don’t have the critical equipment needed for practical works in Ghana,” he said.

He explained that with such opportunities and the learning equipment available, a student who was either on government scholarship or supporting himself or herself would want to stay and complete the process.

He assured President Kufuor and the First Lady they would stay united and be part of the development process.

Singapore and Ghana’s relationship dates back more than half a century after independence. Singapore, with the same climate as Ghana, has a more organised society, green, clean environment, with citizens taking their civic responsibilities seriously.

It placed priority on education and creation of human resource tailored towards the economic social progress.

To them, much of the progress made was as a result of a disciplined society.