Kaya made the time 2:16.02. She was the first Ghanaian to compete at the games.

Born in Canada, the 14-year-old was given a spot at the Olympic Games by FINA, the world’s swimming governing body, after competing at the FINA World Championships in Karzan, Russia, in 2015.

Kaya competed in the women’s 200m freestyle heats during the FINA Swimming World Championships on 4 August 2015, a key requirement for qualification to the Olympics.

Below is the 200m women’s freestyle swimming Heat 1 results: 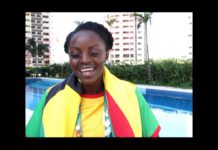