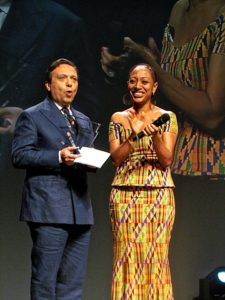 Hon. Samia Nkrumah was this week awarded the “Grand Prix Communication and Social Commitment Award”, as “one of the new women leaders of the African continent” in the Italian city of Milan in northern Italy. Milan is preparing to host “The Universal Exposition 2015 “, popularly known as Expo 2015 next year and Ghana will be one of the main participants in the event.Samia received the Communications and Social Commitment Grand Prix Award for her social intervention activities to improve the quality of life in the district she served as member of Parliament th elast four years in the Western Region of Ghana, as well as to her contributing to achieving peace in communities through development. These activities ranged from sanitation to health and the environment. The GrandPrix is the most important award communications award in Italy. The ‘Gala Finale’ was held Tuesday evening in the prestigious Teatro Nazionale with a full house audience of two thousand people.The evening was a showcase of Italian excellence in the fields of communication, advertising and culture. Renowned personalities from industry, the arts and sports were in attendance at the in the capital of the Lombard region also known as the fashion and financial centre of Italy.Back in Rome Samia Nkrumah and Architect Mario Cucinella presented the Kwame Nkrumah Presidential Library project at the 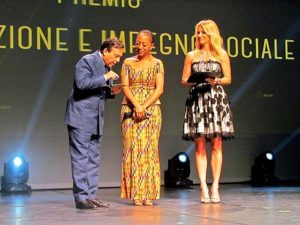 MAXXI, the contemporary arts museum in Rome. The Library will serve as a centre for research of Kwame Nkrumah’s thought and relevance to African Freedom and our socio-economic and cultural emancipation. A host of African Ambassadors attended the event. The Ghanaian ambassador to Italy, H.E. Anita Evelyn Stokes contributed to the discussion. Samia said that a mutually beneficial partnership between Europe and Africa must be based on dialogue and understanding.Ms. Nkrumah concluded her stay by participating in the 51st OAU7AU anniversary celebrations by the African Diplomatic Corp in Rome which brought together various African personalities in the Italian capital to mark African Freedom day and take stock of the last 50 years in the integration discourse.