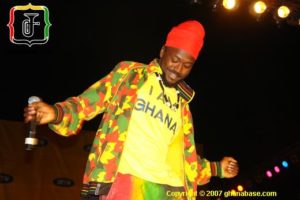 Ghanaian Afro-Raggae singer Samini has made his target as an artiste vividly clear, in a first exclusive interview after his double marriage saga.

Speaking on Peace FMâ€™s â€œEntertainment Reviewâ€, Samini said: â€œI have always said that the Grammy is my target is and I want to get it, so am still working hard to get thereâ€, he emphasized with so much determination.

He made this statement when Kwasi Aboagye, host of the programme, asked what was next for him after winning several awards. Samini has won over eight awards both in Ghana and on the international front. About his reported marriage to two women Christiana Aboagye Mensah and Mercy Geker, based in Canada and UK respectively, Samini said it is his private life and people should respect it as such.

â€œI think that it is still oneâ€™s right to maintain what you call oneâ€™s privacy regardless of how deep people dig into it and how people report it because in any case whatever you do people will talk about it the way they want to. All I can say is I have two lovely daughtersâ€.

He recently made mother Ghana proud in New York City, as the â€œBest Entertainerâ€ in Africa. Samini (real name: Emmanuel Andrew Samini) who continues to make waves on the international music scene, has added yet another award to the array of awards he has won over the past few years. He won the â€œBest African Entertainerâ€ award at the just ended 29th edition of the International Raggae and World Music Awards (IRAWMA) 2010.

This took place on May 2, 2010 at the York College of Performing Arts Centre in Queens, New York. Samini competed in the same category with 2Face Idibia (Nigeria), Dâ€™banj (Nigeria), Amadou and Mariam (Mali) and Femi Kuti (Nigeria).

Other great names at the IRAWMA 2010 night, includes top nominee Jamaican singer Queen Ifrica, who won four awards and Haitan-born International recording artiste Wyclef Jean and civil rights activist Rev. Al Sharpton who won the honorary â€œMarcus Garvey Humanitarian Awardâ€. Though Samini was not there to receive the award, he expressed joy and thanked God for bringing him this far.

â€œThis is one of the few award events for which I have been nominated but couldnâ€™t make it to the awards night, but the most important thing now is that I have won the award for Ghana and I thank the Almighty God for doing it again for me. I also thank my fans who have always supported meâ€, he stated.

He added that the organizers of the event confirmed this to his manager Tony Pun Danning, a day after the award night, via phone and email. Samini is currently in Ghana after his three months intensive studies in the UK and a two-week stay in South Africa.

The 2006 Music of Black Origin (MOBO) and 2009 MTV Africa Music Awards (MAMA) winner disclosed to peacefmonline that he will bring an International Raggae artiste for a grand album launch in August, after the World Cup in South Africa. Samini will be in South Africa during â€œWorld Cup 2010â€ to perform with some Ghanaians and artistes from other parts of the world.