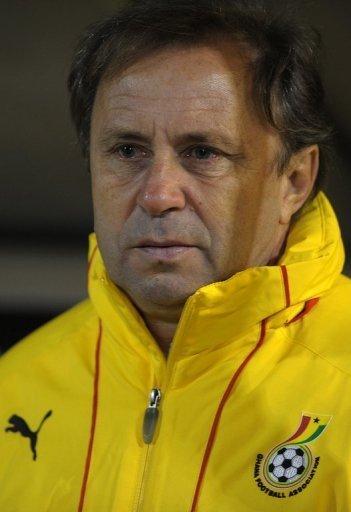 Serbian manager Milovan Rajevac has quit as the coach ofGhanaÂ after two years with the Black Stars.

Ghanasoccernet can exclusively report that Rajevac has signed acontractÂ with wealthy Saudi side Al Ahly Jeddah worth US$4.5m.

The 54-year-old exitâ€™s exit was confirmed by Saudi newspaper Economic who reported on Thursday that the Serbian had arrived in the country.

TheÂ GhanaÂ FA is yet to be officially informed of the decision even though his agent, who has been angered by Rajevacâ€™s decision to snub the Black Stars, has reported the issue to theÂ GhanaÂ FA boss Kwasi Nyantakyi.

This means the Black Stars are looking for a new coach ahead of next monthâ€™s clash with Sudan in Accra.

Rajevac arrived in Saudi Arabia on Wednesday night in the company of a British agent Alexander Wallis.

He jumped ship after opting to sign for Saudi Arabian side Al Ahly without the blessing of his agent Goran Milovanovic which has sparked a tug-of-war.

His agent wanted him to sign the four-yearÂ contractÂ proposed by theÂ GhanaÂ Football Association but Rajevac wanted to go for theÂ moneyÂ by signing for Al Ahly.

He is expected to be unveiled this week by Al Ahly.

His first game in charge of the side will be on 16 September when Al Ahly clash with their city rivals Al Ittihad Jeddah.

The coachâ€™sÂ contractÂ expired on 17 August and the Serbian has continued to work without the new deal being signed.

Rajevac took a relatively youngÂ Black StarsÂ team to the final of the Africa Cup ofNationsÂ in Angola in February.

He also led the team to the quarter finals of the World Cup a few months later in South Africa, triggering calls from fans and players alike that hisÂ contractÂ be extended.