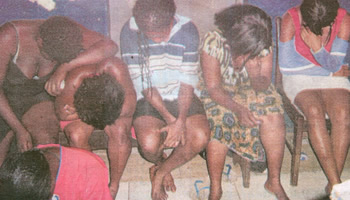 According to the report, the young women, usually enticed by the guise of further education in Russian universities, â€œare kept in confinement for the purpose of the said trade and their documents and other personal items seized. Those found to be unwilling or non-cooperative are maltreatedâ€.

â€œAmid the general insecurity in the Russian Federation, the girls are being subjected to rape, torture, and assault. Within the past one year, two Nigerian prostitutes were thrown down to their death from apartment buildings,â€ the report said.

According to the Ghana Mission in Moscow, 10 of the women were in the custody of three Nigerians, Kingsley Chinedu (alias Boss), resident in Bratislavkaya Dom. 15; Tony Stephane and one Linda. The report said each of the 10 women had been requested to pay between $35,000 and $45,000, in order to obtain their freedom to live wherever they chose in Russia.

The report said the mission had identified some of the girls Nartey recruited and sent to Russia to engage in prostitution during the past four years as Samiratu Hassan, Rita Yeboah, Mariama Osumanu, Apau Emmanuela, Vida Annor, Fremah Cecilia Ama, and Adoma Georgina Afriyie.

Wiredu and Amankwah jointly recruited Gifty Asante, Salihu Zainab, Bremang Boateng and Comfort Aluah, the report said. The Ghana Mission said it was alleged during the investigations that Wiredu had been engaging in passport racketeering as well. â€œThe Ghana Mission has learnt that on or about July, 2009, he sent 10 Ghanaian passports through a courier to one Peter Boamah in Moscow, which were then sold to Nigerian citizens in the Russian Federation.

The passports are being used for advance fee fraud and prostitution,â€ the report said. The report named a popular top-class hotel at Madina and two popular night clubs at Osu and Lapaz as centers for the recruitment of young women to work as prostitutes in Russia.

The investigators said they had established that the agent, known by the code name â€œLavaâ€, is a native of Wenchi, who recruits girls from the Brong Ahafo Region. â€œLavaâ€ is said to have recruited from the region and sent to Russia Barbara Konadu Mavis, Getrude Frimpomaa and Rosemond Anima. The mission said it found that Comfort Amoah and Auntie Bee facilitated the trafficking of two girls, Susan Danso and Harriet Brago Abena, who were sent to Nana Akwasi Amoah in Russia on May 15, 2009.

According to the findings of the investigation, Akwasi and Joyce Ababio attempted to sell the two Ghanaian girls to a Nigerian woman identified as Linda, for $5000 each, but the girls escaped. Ghana mission facilitated their repatriation to Ghana with the assistance of the International Organisation for Migration.

The report said it has been established that there were two groups of women who had been sent to Russia to work as prostitutes: those who were already in the sex trade in Ghana and who, therefore, knew what they were being recruited for in Russia and others who were sent to Russia on the pretext of finding them employment and admission into universities and other schools.

The investigators said they had identified some educational institutions in Russia which were being used to facilitate the trafficking of women from Ghana. Communication between Ghanaian agents of the ring and their Russian accomplices is mainly by e-mail, telephone and courier services. From Ghana, they send by mail nude pictures of Ghanaians girls for assessment. If found suitable, the girlsâ€™ particulars are submitted to universities in Russia for investigation/admission.

The mission said it had seen invitations sent to secure young Ghanaian women from the Peopleâ€™s Friendship University (Patrice Lumumba University) Kursk State University and Moscow State Technical University. The Ghana Mission made references to the high HIV and AIDS prevalence rate in the Russian Federation, stressing that the Ghanaian girls recruited to engage in commercial sex work in the country were at great risk as some of them were often forced to have unprotected sex in spite of the high risk of infection.

The mission estimated that there were over 500 Nigerian and Cameroonian girls engaged in prostitution in Russia and said the activities of the prostitutes were influencing the behaviour of some African students, especially at the Peopleâ€™s Friendship University. â€œIf the trend is not curtailed, it may also extend to Ghanaian students,â€ the report added. The report said some Nigerian girls, especially those in Saint Petersburg, were using Ghanaian passports obtained through Ebenezer Wiredu in Ghana.

It said the Ghana Mission was finding it difficult to break the illicit trade in Ghanaian passports because of the â€˜unhelpful attitude of the Russian Law enforcement agentsâ€. The Ghana Mission recommended that the authorities in Ghana solicit the assistance of the media to educate the Ghanaian public on the dangers of embarking on adventurous trips to Russia.