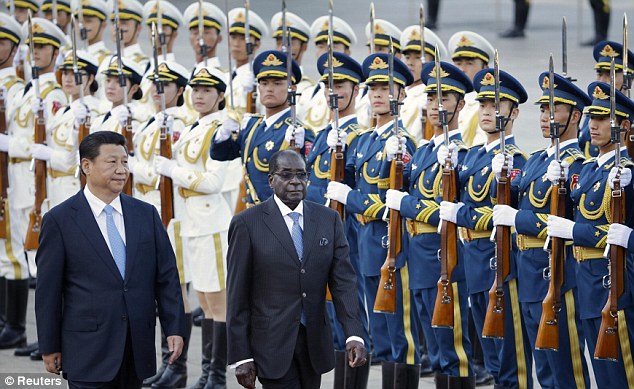 Zimbabwe president Robert Mugabe (pictured) has come under increased fire and scrutiny due to his disputed electoral win last year and increasing business ties with China. Mugabe recently visited the Asian nation this past Monday, which some say is a bid for investment from China to help the struggling Zimbabwean economy. However much of that criticism hails from the West, which has routinely frowned upon China’s actions throughout the continent.

The Guardian reported on the trip, which is the 13th such visit Mugabe has made thus far. China’s President Xi Jinping has hailed Mugabe as an “old friend” of his nation and the glowing words between the leaders express mutual admiration. However, it seems the true impetus of this most-recent meeting is partly business-related.

For years Mugabe, accused by the west of electoral fraud and human rights violations, has been pushing a “look east” policy for business. Now this appears to include persuading the population of Zimbabwe, a former British colony – where cricket is played and O-levels and A-levels are still studied, to become more familiar with Chinese culture.

This alignment of culture has been ongoing as China’s ambassador to Zimbabwe wrote in state paper the Herald about a recent “Night In Beijing” concert that was held in the capital city of Harare. There was also a Zimbabwe-China quiz show hosted in a joint effort by the nations that served to familiarize the nations with each other.

Zimbabwe and China’s ties go back to the 1970s, when the Chinese Communist Party aided the African nation by supplying weapons and military training during its liberation fight. China has also invested more in Zimbabwe than any other African nation, solidifying rumors of a buy-in of sorts. But there are some reports that the focus on the relationship is largely misguided.

Some African nations view China as a partner, not a clandestine colonial power looking to overtake and usurp leaders currently in power. China’s role in firming up infrastructure, spawning new business opportunities, and providing jobs for African workers cannot be disputed.

Yet, the West points at China’s  weaponizing of Sudanese and Zimbabwean troops as an issue of humanitarian concern.

China is certainly mining the continent for resources and has set up several business centers in other nations. The idea some international economists suggest is that China is attempting to shift Africa from becoming dependent on outside aid and instead help model it as a self-sufficient coalition of nations with thriving businesses helmed by African executives armed with the tools to improve upon their growing fortune.

Mugabe has been slammed with sanctions from the United States and the European Union, after his allegedly tainted election results last year, and was one of a handful of African leaders who were not invited to Washington, D.C., to attend the recent U.S.-Africa Summit hosted by President Barack Obama.

However one sees Mugabe, though, why shouldn’t he seek opportunities with partners who are willing to do business that will clearly prove beneficial?