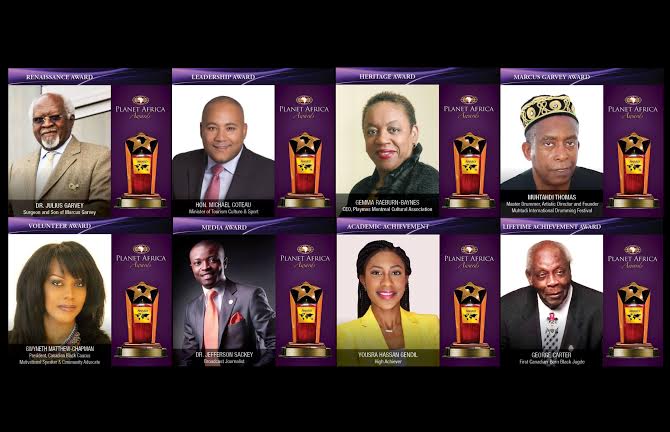 In all, sixteen achievers have been listed as recipients of the 2015 Planet Africa Awards. Leading the list is Dr. Julius Garvey, son of the legendary social activist Marcus Garvey who was a proponent of the Black Nationalism and Pan-Africansm movement. Dr. Julius Garvey who is a Physician and Activist will receive the Renaissance Award for advocating for a universal Pan-African nation, with the redemption and renaissance of African civilization at the centre of it all. He employs revenue from his medical business for initiatives in the US, Caribbean and Africa. He has planted 500,000 trees in Ghana, West Africa and has led missions to South Sudan, Haiti and Jamaica and continues to inspire audiences with his father’s message of a common identity and positive transformation.
Canada’s minister of Tourism, Culture and Sports, The Honorable Michael Coteau wins the Leadership Award for facilitating leadership and raising awareness of the UN’s International Decade for People of African Descent. He was first appointed Minister of Citizenship and Immigration in 2013. In June of the year, he hosted the historic Black Government Leaders Summit in Nova Scotia to share ideas, and seize opportunities.
Lifetime Achievement Award goes to George E. Carter, the first African Canadian Judge. In 1947, Carter worked for Sydney M. Harris, a Jewish Canadian. No other law firms would accept Black students at the time. He was called to the Bar in 1949 and opened his own firm on Bay Street in 1952. He was the first African Canadian to be appointed Judge in the Ontario Provincial Court in 1979 and later to the Ontario Court of Justice. Carter was instrumental in the setting up of Legal Aid in Ontario. His accolades and awards include the Queen Elizabeth II Diamond Jubilee Medal and the Order Of Ontario.
Media Award goes to Ghanaian journalist, Dr. Jefferson Sackey well known for his coverage of conflicts and natural disasters in Africa. This award is given to an innovative and creative individual who raises the bar in the media industry and uses his or her platform to increase awareness regarding issues that affect society. Sitting in high profile diplomatic meetings, from the UN headquarters in New York to the coverage of the Ivorian crisis of 2010, Jefferson mastered the art of international reporting on the field, interviewing global figures on critical global issues. International networks like CNN and DWTV have featured some his news stories. From a humble beginning at TV Africa in Ghana, he has been recognized by Journalists for Human Rights in Canada for excellence in human rights reporting. In 2013, Malta Guinness Ghana, listed him as an Africa Rising Brand Ambassador to inspire the African youth and was awarded an Honorary Doctor of Humanities from Dayspring Christian University, USA in 2014. He has also received 2015 AEA Media Excellence Award. He serves as Senior International Correspondent for the Multimedia Group in Ghana.
The Nelson Mandela Humanitarian Award goes to Tamara Gordon, Founder of Tamara Gordon Foundation. Click here for the full list of recipients http://www.planetafricagroup.com/Awards/recipients.html
Since 2004, the Planet Africa Awards program has identified and recognized hard work, excellence and professionalism, which produce role models, especially for young people. The mission is to showcase deserving individuals, organizations, businesses and agencies that make a profound difference in the lives of people of African heritage globally.
Past recipients include Nobel Prize Winner, Professor Wole Soyinka, Olympic Gold Medalist, Daniel Igali, Nuclear Scientist, Dr. Sylvester Osamusali, movie and television star, Isaiah Washington and Legendary Singer, Yvonne Chaka Chaka, among other highly accomplished individuals and organizations.
Recipients will be presented with their awards at a prestigious ceremony on Saturday 24th October, 2015, at the Pearson Convention Centre in Brampton, Canada by strict invitation.