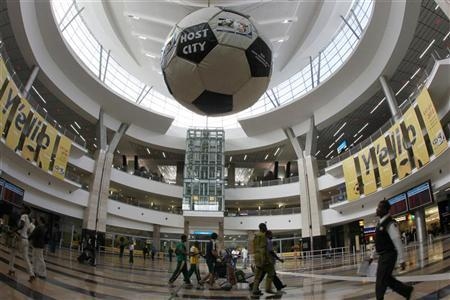 JOHANNESBURG (Reuters) – South Africa on Tuesday unveiled a 19 billion rand transport upgrade for the World Cup including revamped airports, a high speed urban train and a new bus system.Â Â Officials denied too much had been spent on the soccer spectacular, saying the new infrastructure would leave a lasting legacy in a country where the majority black population was starved of public transport under apartheid.

President Jacob Zuma opened the greatly expanded Johannesburg airport — already Africa’s biggest — which officials said would handle 28 million passengers a year and more than 60 flights a day. Journalists also travelled on the gleaming new Gautrain, which will link the posh district of Sandton, where many World Cup fans will stay, and the airport. The train would run on this leg before the World Cup, starting on June 11, officials said. It will be expanded to central Johannesburg and Pretoria next year.

“We have not had wonderful public transport in South Africa,” Deputy Transport Minister Jeremy Cronin said after the airport opening ceremony. “Government has identified the privilege of hosting the World Cup as an opportunity also to lay down the beginnings of a wonderful public transport system,” he said. Soccer’s governing body FIFA last year flagged transport as a concern but officials said the system was ready and would be able to handle the world’s most-watched sporting event.

“We are quite convinced that international visitors to South Africa will have a wonderful experience culturally, sporting wise and also a hassle-free transport system and that there will be a legacy left for ordinary South Africans,” Cronin added. Airports in Cape Town and other host cities have also been refurbished and a brand new one built in Durban.

Transport Minister Sibusiso Ndebele said 570 buses had been purchased for the World Cup, 110 of them to provide an inter-city service. “Government has invested more than 19 billion rand on public transport infrastructure for the World Cup to ensure that the tournament leaves a rich legacy for our country and continent,” he added. Ndebele said South Africa would provide World Cup fans with a ground transportation system that “is reliable, easily accessible, safe and secure, convenient and affordable.”Cronin confirmed two or three passenger liners would act as floating hotels during the month-long tournament.

There have been concerns that airlines may not be able to handle the fan traffic but Skhumbuzo Macozoma, a transport specialist from the local organising committee, said “right now we don’t have any alarm bells.” The number of foreign fans expected was recently sharply cut from 450,000 to 200,000 because of the world economic crisis, high costs and alarmist reporting about violent crime. But officials denied this may result in over-investment in the World Cup because the transport system would remain for the future and extra planes were being leased rather than purchased.

“There is no message that says we have spent too much,” Macozoma said.