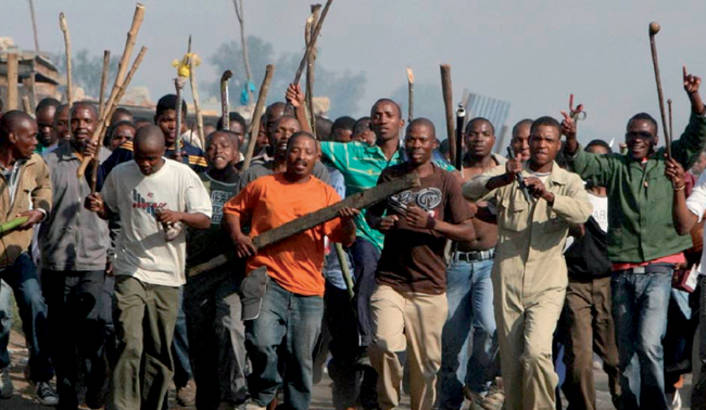 Thousands across Africa have gone online to label South Africa “xenophobic” – a trend that actually began before the recent murders of immigrants and widespread violence.

Foreign-owned shops were looted overnight in eastern Johannesburg and at least five people died in attacks against immigrants in Durban this week – just the latest events in a two-week spate of violence directed at migrants from other African countries. Millions of Africans from other countries work in South Africa –perhaps 1m from Zimbabwe alone – and the violence against some of them has been met by anger and solidarity online from across the African continent. Especially in Nigeria, Ghana and Kenya as well as inside South Africa itself, thousands of people on social media used a hashtag, #XenophobicSA, to condemn attitudes in the country.

The attacks began after alleged comments by a ceremonial leader, Zulu King Goodwill Zwelithini, telling migrants to go home – although he says his remarks were mistranslated. Although hashtags highlighting the violence have spiked in the past few days, the treatment of foreigners has long been a discussion point on social media. In distant Kenya, prominent blogger Robert Alai started using the hashtag #XenophobicSA in late March – only to see a huge spike when news of the attacks broke. 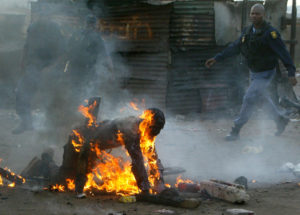 “Kenyans in South Africa were contacting me with stories about beatings and mistreatment of foreigners,” Alai tells BBC Trending. “I sought more information and more pictures and it was very interesting to pick up on the things that were going on there but weren’t in the news.”

A trickle of messages came after Alai first tweeted. The number of tweets under that hashtag remained very low however until the recent violence. More than 80,000 tweets have used #XenophobicSA in the last week.

There have also been other spiking hashtags condemning the violence. More than 10,000 people used the hashtag #PeaceMarch in reference to an anti-violence rally in Durban. Related terms trended, including #SayNoToXenophobia and “JHB CBD” – for “Johannesburg Central Business District”, where foreign-owned shops shut in anticipation of further violence.

“These people who are being attacked are only trying to provide for their families by working in a neighbouring nation,” says Wadzanai Thembani, a Zimbabwe native currently living in the United States who tweeted #SayNoToXenophobia. “They have not stolen from anyone: they are only working hard so their families have something to eat, somewhere to sleep, but now their being treated worse than criminals.”

“There’s a lot of unemployment in South Africa and still a gap between blacks and whites,” he says. “Foreigners are doing the jobs that South Africans won’t do … they get blamed, but that’s wrong.”

It’s a sentiment that was echoed by two of the country’s most prominent NGOs. “This is the latest manifestation of a phenomenon which has been troubling our democracy for a long time,” the Nelson Mandela and Ahmed Kathrada foundations said in a joint statement earlier in the week.