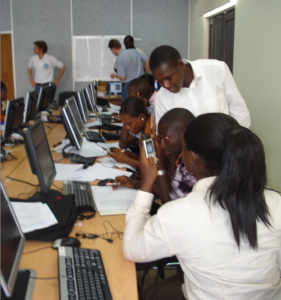 Accra, March 10, GNA – The Spanish Government on Wednesday presented 26 computers with accessories and anti counterfeiting machines valued at about 58,000 Euros to the Ghana Immigration Service (GIS) in Accra to boost it’soperations.Mr. Vicente Garcia Sanjuan, Head of Migration Desk, Office of the Director-General, Migration and International Relationship, Ministry of Interior, Spain who presented the items lauded the excellent and effective collaboration between Ghana and Spain in the fight against illegal immigrants and organised crime.He noted that while legal migrations opened door to a world of opportunities, illegal immigration was dehumanising and helped groups engaged in human trafficking.Mr. Sanjuan said criminal groups that engaged in organised crime usuallyÂ left victims especially women and children in sexual exploitation, marginalisation, social exclusion and slavery. “The migrants sometimes make outrageous commitment, with members of organised crime that tie them or their families for many years,” he added. Mr. Sanjuan contended that it was the duty of authorities to fight against illegal immigrant and reduce the action of organised crime by ensuring that law enforcement agencies enforced laws on migration.To address illegal migration, he said Spain was also encouraging West African countries through capacity building as well as provision of logistics under the EU AENEAS programme. Mr. Sanjuan said apart from mounting surveillance on the sea borders, itÂ was also building security networks for the exchange of information in the fight against illegal immigration. In fighting against document fraud, he said, Spain had co-financed training courses in Ghana and mentioned the formation of new Centre of Expertise in Migration and Identity Document (CEMID) in the country to check fraud. Mrs. Rebecca Chantel Guinea Stal, Charge d’Affairs of Spain, said provision of the computers was to provide a very practical way for both countries to learn from each other.Ms. Elizabeth Adjei, Director of Immigration Service, receiving the items said it had benefited from numerous projects from the Spanish Government towards capacity building. She mentioned a two-million Euro facility for the installation of a 14 Digital Boarder Surveillance Equipment around Ghana’s 45 boundaries. Ms. Adjei said the GIS was embarking on reforms and restructuring of its operations especially in human and drug trafficking. She said GIS had received some cases involving identity fraud and impersonation especially among people who want to travel to Europe and the computers would boost their operations and enhance database.