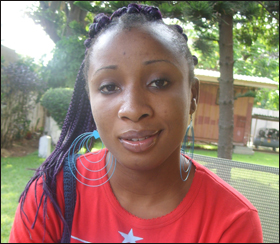 History would be made in Ghana on the 19th and 20th of February this year when TV Africaâ€™s sensational presenter and celebrated film star, Naa Ashorkor Mensah-Doku joins other celebrities in a public vagina show.The new kid on the block, Lydia Forson, is reported to have agreed to join Naa Ashorkor in the vagina show and many Ghanaians are waiting impatiently for the interesting spectacle.NEWS-ONE gathered that the two young but popular Ghanaian actresses would be embarking on the show to mark the â€˜World Vagina Dayâ€™ aimed at popularizing the usage of the word â€˜vaginaâ€™ and demystify the contempt associated with it.In an interview with NEWS-ONE, Naa Ashorkor confirmed she would be participating in the show and explained: â€œIt is an educative event.If you hear the name, you might be thinking it is vulgar or sexual but it is actually not. It seeks to educate women about their vagina and other women issues. It will be challenging but I am focused and I will deliver.â€Naa Ashorkor said one of the reasons she is part of the event is that it is aimed at empowering women.Lydia Forson has however been tight-lipped on the matter. When NEWS-ONE attempted to speak to her, her manager, one Habiba, said the paper should first get a written questionnaire and email it to her before she allows an interview with Lydia.The event is the first of its kind in Ghana and would be in the form of an adult theater. It would have the two young but popular actresses going public with their genitals by verbally dissecting issues about their vaginas, in the adult theatre art production.The two actresses will be re-enacting real life experiences of women across the world, with special emphasis on vagina. Though the actresses are not noted for openly talking about their reproductive organs, they will be doing that for the first time.It would, among other things, address issues about womanhood and encourage mentioning the word â€˜vaginaâ€™ without any shred of shyness as has been the culture in Ghana and other African countries.Event organizers, Dudu Communications and Play House Productions, told NEWS-ONE that the production is entitled â€˜Vagina Monologueâ€™ and that the script was written by an American, Eve Ensley.Linda Nutakor, speaking on behalf of Dudu, explained that the programme forms part of a chain of activities planned to mark this yearâ€™s World Vagina Day to project the dignity of womanhood and empower women in all spheres of life.â€œEven though vagina is part of the womanâ€™s anatomy, many Ghanaians feel reluctant to mention it in public, let alone discuss it.â€œIn almost every society, the vagina is a taboo to mention. We donâ€™t talk about it. If we parallel it to women too, we donâ€™t talk about them.As such, a woman is always second in everything in the house, society, and even in governance. It is the same with the vagina. After this event, we expect that people can mention vagina without any shame,â€ Linda Nutakor added.Other theatre artistes who will be sharing the stage with Lydia Forson and Naa Ashorkor Doku are Kezia Addai Boateng, Pearl Darkey and Obenewaa Nkansah.