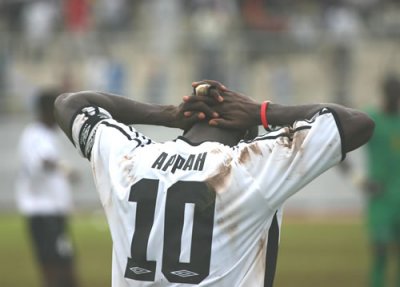 Appiah’s last outing for Ghana was against Uruguay in the quarter-final clash at the 2010 World Cup in July and that game brought down the curtain on a glorious career that has seen the 29-year-old led the Black Stars to two successive World Cup finals.

The midfielder who made his debut for the Black Stars in 1996 managed 17 goals in 68 international games.

“After 68 games and 17 goals for the national team â€“ Ghana Black Stars, I have decided to retire from International Football with immediate effect.

“I have enjoyed my time playing for Ghana from the youth teams right through to the senior team and I am truly grateful for having the opportunity to serve my country. It has been an honour and privilege to play for Ghana

“I am proud of my achievements with the national team especially being the first captain to take Ghana to her first world Cup in Germany in 2006. I am also pleased to have been part of the squad in South Africa and can hold my head high and say I gave my all to Ghana

“A big thank you to my family and friends, the people of Ghana , every Black Stars player I have played with, the GFA and to all the fans that have supported me throughout my Black Stars career

“I will still be a Black Stars supporter but for now I want to concentrate on my club career. I know I have a few more years left in me at the highest level and I am looking forward to it,” a statement on the player’s website read.