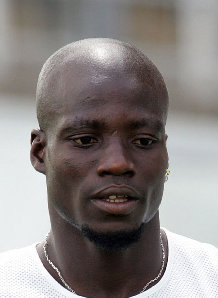 Ghana captain Stephen Appiah has returned to club action after a two-year absence after coming on as a second half substitute for Bologna.

This is a big boost for Appiah and Ghana football coming just two days after he was named in the provisional World Cup squad.

The 29-year-old, who plays in midfield for the Serie A side, took over from Zalayeta just at the start of the second half in their crucial game against Catania on Sunday.

The stadium was packed in anticipation of the affable Appiah’s return.

Appiah has not played since an ankle injury led to his falling out with Turkish side Fenerbahce and subsequent legal battles further delayed his return.

But in that period he has played World Cup qualifiers for the Black Stars helping him to a second unprecedented global appearance.

This appearance for Bologna is likely to make his critics fall on their swords but there is a possibility they will demand more from him.

Appiah was named among Ghana’s 30-man squad for the World Cup on Friday and his action for Bologna will be another major coup for the influential captain.

His return to action for Bologna means the influential enforcer has regained his full fitness after a botched knee surgery and dispute with his former club Fenerbahce ruled him out action.

This is also massive boost for the midfielder and his country ahead of the 2010 World Cup to be held in South Africa which is just a few weeks away.

Another match for Bologna before the season ends will all but end the criticism over his call-up to the national team.

The former Juventus, Fenerbahce and Parma star was signed as a free agent by Bologna late last year.

The Ghanaian was previously released by the Turkish side in June 2008, but continued to feature for the Ghana national team, despite the recurrence of a knee injury.