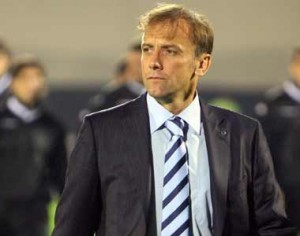 The Ghana Football Association has confirmed Goran Stevanovic as the new head coach of the men’s senior team, the Black Stars.

The Serbian and the FA today finalised the details of his contract.

Stevanovic, 44, will be unveiled at a news conference at 10:00 GMT on Wednesday as he assumes the reigns of the team from Milovan Rajevac who saw out his two-year contract last year.

“The Ghana Football Association have appointed a new coach for the Black Stars. He is in the person of Goran Stevanovic.

“We have successfully negotiated with the coach and he would replace his compatriot, Milovan Rajevac.

“The coach will be presented to the public at a press conference at the GFA on Wednesday, 12 January 2011 at 10:00am,” an FA statement read.