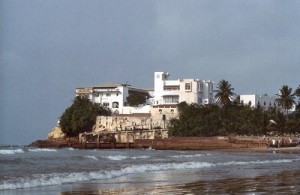 The Carl Wilson seized cars debacle has taken another twist, with a businessman, Alhaji Al-Wahab, claiming that he has seen his two vehicles at the seat of government, Osu Castle, and the forecourt of the Parliament House in Accra.The murky issues that led to Wilson being dramatically sacked by President John Evans Atta Mills on Thursday escalated when the fed-up businessman took his case to the media after filing a writ against the deputy Chief of Staff, Alex Segbefia and the Attorney General, over his three vehicles that he said miraculously vanished from the Tema Port.Not even the interventions of Vice President John Mahama, National Security Advisor Brig-General Joseph Nunoo-Mensah (rtd), Head Of Communications at the Presidency Koku Anyodoho and Nii Lantey Vanderpuye could make Alex Segbefia and his side-kick, Carl Wilson, mellow down.

Speaking on Asempa Fm and later on Citi Fm yesterday, Al-Wahab, who was said to be an NDC sympathizer, did not mince words but specifically fingered Carl Wilson and Alex Segbefia for illegally confiscating the three vehicles that he had imported for sale.He mentioned the vehicles as a 2009 model American Dodge, a 2009 Nissan Murano 4-wheel drive, also a 2009 and a 2007 Toyota Camry which he found after a long search, had been registered and was being washed at the Presidentâ€™s washing bay at the Castle.The victim of the alleged official theft, domiciled in the US for over 18 years with a 10-year stint in Europe, said he is a car dealer who sells imported cars to companies and individuals.Narrating his story, which comes on the heels of the dismissal of the man who until a few days ago handled the disposal of confiscated cars at the Tema Port, Al-Wahab said in 2009, he bought the above mentioned cars including a 2007 model Toyota Camry, and when they arrived in Ghana, they were seized by Carl Wilson.He said he paid $28000, $17000 and $15,900 for the three vehicles and paid GHÂ¢48,000 as duties to clear them, only to be told by officials of CEPS at the harbour that Carl Wilson had driven them off to his â€˜private portâ€™ and subsequently refused to release them to the owner.Carl Wilson claimed the cars were stolen and went ahead to seize and allocate them to the Castle where the owner found them.Al-Wahab was said to have gone to the Castle seeking audience with Vice President John Dramani Mahama and coincidentally, saw his cars being washed at the presidential car park.â€œI paid duties on the cars but Carl Wilson seized the cars for his personal pool,â€ he said.He intimated that he went to the Interpol office to ascertain the authenticity of the status of the cars and gathered they were not listed, learning later that the vehicles had been confiscated by the Castle.â€œI went to the Castle and saw my cars being washed at the Presidential car park. I went to the Vice Presidentâ€™s office from where I was sent to a certain Col. Attachie to handle my complaint,â€ he said.Giving the genesis of his travails after paying the appropriate duties, he said he was asked to go to the Tema Port but realized afterwards that it was all a set-up â€œand I never found my carsâ€.Fifty visits to Col Attachie did not yield any positive dividend, as regards tracing his cars, whereupon he was directed to Alex Segbefia, the deputy Chief of Staff who was said to have employed Carl Wilson.Mr. Segbefia, he went on, asked him to meet him at Parliament House for a discussion and upon arrival there, he saw his Nissan Murano parked at the forecourt, and broken into.Continuing, he said he went back to Alex Segbefia and waited for three hours without being granted any audience by the official.He then turned to Brig. Joseph Nunoo-Mensah (rtd), National Security Advisor, who sort of intervened via a phone call after which he advised the complainant to meet him again on another date. During the last meeting with the National Security Advisor, he said the man advised him to take the matter to court.Taking issues with Alex Segbefiaâ€™s description of luxury cars as imports from drug barons, Al Wahab said, â€œI am a learned person. There is no school for training presidents, chiefs of staff.â€Carl Wilson made unsavoury headlines a few months ago following allegations of impropriety in the management of confiscated cars at the Port of Tema.He has been accused of channeling so-called confiscated cars to car dealers in town- vehicles which he seized with the excuse that they were stolen in the US and Europe.When matters came to a head and the allegations against him increased, the deputy Chief of Staff Alex Segbefia, to whom he reports, defended him to the hilt.The deputy Chief of Staff stated that he did not deal with conjectures but rather, evidence which according to him, were not available to warrant the dismissal of Carl Wilson.Vehicles are subject to seizure when importers are unable to clear them at the port. Such cars are disposed of by the Confiscated Vehicles Allocation Committee of which Carl Wilson was chairman, until a few days ago. So bad did the management of the man turn out to be that even NDC supporters called for his head.Disposal of seized cars, which under the previous government yielded revenue to the state, has failed to do so under the current dispensation, as the cars are mostly allocated to cronies of government and party stalwarts, with nothing going into the state kitty.The President eventually flexed his muscle and yelled the marching off orders to Carl Wilson, this time ignoring the intercession of his mentor, Alex Segbefia.Al-Wahab might not be excited about the exit of the man responsible for his woes, perhaps until he retrieves his vehicles from the presidential car park. No wonder he is still screaming â€œfoulâ€ across the airwaves