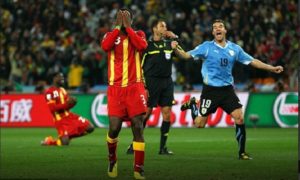 Ghana captain Asamoah Gyan has revealed he is still haunted by his penalty miss at the 2010 World Cup quarter final against Uruguay after Luis Suarez handled a goal-bound ball in the last minute of extra time.

With extra time almost up, Uruguay striker Luis Suarez scooped the ball out of Uruguay’s net when Dominic Adiyiah’s header looked certain to be going in.

The then Ajax Amsterdam man was sent off and a penalty was awarded to Ghana. But Gyan hit the crossbar with the resultant spot kick, and Ghana went on to lose on penalty kicks, in what till date, remains arguably the most dramatic match in World Cup history.

It was a moment that broke African hearts, denying the continent their first ever place at the semi final of the global showpiece.

Six years have now passed since the incident. Luis Suarez continues to be worshiped by his countrymen, but abhorred by many an African.

For Gyan, the agony of that night in Johannesburg still remains fresh in his mind.

“It’s not only when I’m in South Africa that I think about that penalty. It’s been haunting me once in a while but it has made me a strong man,” Gyan said ahead of the Black Stars’ friendly against South Africa on Tuesday.

“Returning South Africa is always special because they showed us so much love during that tournament,” Gyan said.

Ghana opened their 2018 World Cup qualifying with a disappointing home draw against Uganda on Friday.