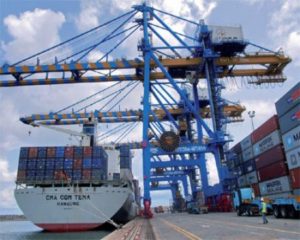 The $1.5 billion expansion work to open up the Tema Port to accommodate larger container vessels, increase container handling capacity and boost general productivity will start within the first half of this year Richard Anamoo, Director-General of the Ghana Ports and Harbours Authority (GPHA), has indicated.

The GPHA boss disclosed this to journalists on the side-lines of a thanksgiving service organised by the authority in Tema, and was also optimistic that several developmental projects which were started in the past — and not contained in the new expansion program  — will also be completed by end of the year.

“The actual construction works for the Tema Port expansion will commence between the first and second quarters of this year, and will see the port expanded to four times its current size and the Tema-Accra motorway also expanded to six lanes.

“2016 will be a great year, as several developmental projects which were started in the past will be completed,” he said.

In June last year, the GPHA signed the deed with Meridian Ports Services — a leading container terminal operator in the world — a precedent to commencement of the project.

The Tema Port expansion project involves building breakwater and an access channel harboring four deep-water berths to accommodate larger vessels with high capacity equipment, and this will position the country as a maritime hub and the most efficient one-stop port services center in the region and the rest of Africa.

The five-phase project will include a new container terminal and have a capacity of 3.5 million TEU; and the Accra-Tema motorway will be upgraded to three lanes in each direction.

Board chair of GPHA, Samuel Ofosu-Ampofo, speaking earlier on the project indicated that the expansion work will be a giant leap for the authority as it “will create about 5,000 jobs with related economic benefits.

The thanksgiving service was organised by the GPHA to appreciate God for protecting the board, management and staff of the authority in the 2015 business year.

Head pastor of the Full Gospel Church, Bishop S.N Mensah, charged staff of the authority to give their best in the discharge of their duties.