Top UK-based Nigeria gospel musician, Muyiwa Adebayo whose music has gone down well with gospel music lovers in Europe, America and some parts of Africa, is visiting Ghana. 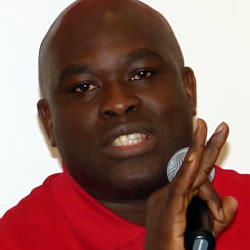 Muyiwa is in the country to study the trend of Ghanaian gospel music and also to do collaboration with some seasoned gospel musicians, as well as build a healthy relationship with the gospel music industry in Ghana.

Muyiwa, who burst onto the Christian music scene seven years ago with his maiden album ‘Restoration’ featuring Riversongz, a dynamic chorale, has been inspiring listeners across the UK and beyond with his music.

He told journalists that his visit to Ghana was to hook up with his colleagues in Ghana to promote the work of God.

He teamed up with EMMA award-winning producer Eddie Martin (whose writing/production credits include Whitney Houston, Sarah Connor, Ne-Yo, Jennifer Lopez, Chris Brown and West Life), and the result was two so-far-released hit albums selling in excess of 80,000 to date.

The new 2008 live music album, â€œDeclaring His Loveâ€, saw them reunite â€“ a development which promises to raise the stakes musically and visually as an exclusive separate DVD will also be made available in support of extensive national/international touring.

Since the release of his two albums, â€œRestorationâ€ and â€œDeclaring His Powerâ€, Muyiwa’s voice in the gospel world has become instantly recognisable and one that he hopes will unite people of all races, cultures and denominations.

Muyiwa has performed at a number of high-profile UK events including Easter People, Soul in the City among others.

He was the first ever â€˜International Artisteâ€™ to be invited to perform on the prestigious BET Celebration Of Gospel TV Show.