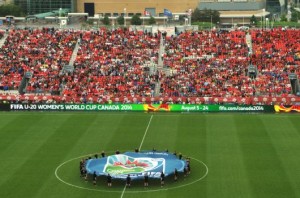 The City of Toronto is proud to host to the FIFA U-20 Women’s World Cup Canada in August 2014.

The event runs from August 5 to 14, 2014 and the City of Toronto (along with Edmonton, Moncton and Montreal) is one of the host cities for this critical lead-in event to the FIFA Women’s World Cup tournament which will be held across Canada in 2015.

Toronto will host seven matches across four days at Toronto’s National Soccer Stadium (otherwise known as BMO Field). This state-of-the-art arena located at Exhibition Place is Canada’s first soccer-specific stadium and has a seating capacity of over 20,000.