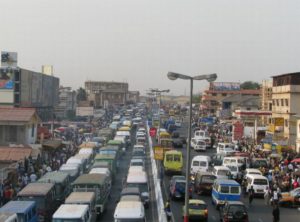 As traffic congestion in Accra worsens, an Urban Transport expert has warned that the country might not be able to deal with the current heavy traffic jam in the city despite government’s effort of widening roads in the country. The expert, Engineer Magnus Quarshie who is the Chairman of the Public and International Affairs of the Ghana Institution of Engineers contended that road widening, which is a short term approach to solving traffic congestions would not be able to deal with the current deplorable situation. Mr. Quarshie believes there was the need for the city authority to adopt a smarter approach by adopting the Sidney Coordinated Actuated Traffic System (SCATS) into the country’s traffic system.
According to him, the SCATS system which is quite cheaper and is being used in other cities such as Melbourne, Hong Kong and Shanghai uses traffic cameras or induction loops which could be installed within road pavement to count vehicles at each intersection and adapts the timing of traffic signals in the network through a centralized datacenter could be a panacea in the short term. To avoid being trapped in Accraâ€™s tortuous traffic jams during rush hours, many residents of leave home very early to get to their various places of work and get home late because of traffic congestion. There are fears the situation could get worse as the national capital continues to grow in terms of size and population.

Commuters plying the 37-Madina route, Kaneshie-Malam Junction, Sakumono-Teshie road and the Achimota â€“Ofankor stretch, are usually held up in traffic jams for hours.

Speaking to The Lead in Accra, Ing. Quarshie asserted that if cities like Bogota and Rio De Jeniero both in Columbia and Brazil respectively, which were one’s considered among the worst traffic cities in the world have been able to deal with heavy traffic congestions there was the need for Ghana to learn from such international experiences.

â€œThe cheapest and easiest way out of this traffic congestion is to have an efficient public transport system which is reliable and affordableâ€ he said. The expert advised that government adopts an Inner City Revitalization Policy by way of re-orienting the current urban cities in terms of land use and transport. According to the expert the country should adopt a more comprehensive use of land by way of building more flats and high rise buildings (sky scrapers) as a way of judicious use of land to create more public space for other activities. He lauded recent attempts by the Accra Metropolitan Assembly (AMA) to dedicate some road space for only public transport saying the move could be augmented by way of also introducing short term discriminatory road pricing in the cities against private cars from entering the cities during the traffic peak hours. He said currently, public transport which commutes about eighty percent of commuters to the city occupies a paltry thirteen percent of road space in the country as against forty percent of road space allocated to private cars which commutes only thirteen percent of commuters.

Engineer Quarshie advised the city authority to also incorporate the idea of creating walkways and planting more tress so as to make walking more easily in the cities Meanwhile, students of Ghana Institute of Management and Public Administration (GIMPA) are also complaining about heavy traffic congestion which interferes with their lectures and are accusing the school’s authority of being insensitive to their plight.

According to the students, the road leading to GIMPA, which is one of the busiest in the city, becomes hectic, especially, after 8pm when lectures are over.

Observations made by The Lead, indicate that students spend close to two hours in vehicular traffic from the school to the main Achimota-Legon road after lectures before they could get out of the GIMPA campus.

The vehicular congestion in the school has worsened as one of the roads leading to the Achimota Police has been closed due to the road construction on the main Tetteh-Quarshie-Mallam trunk road.

Head of Corporate Affairs of GIMPA, Madam Mercy Bamfo Addo told The Lead that management is also worried about the heavy vehicular traffic. She said in the interim, the school has employed services of some security men to help direct traffic.