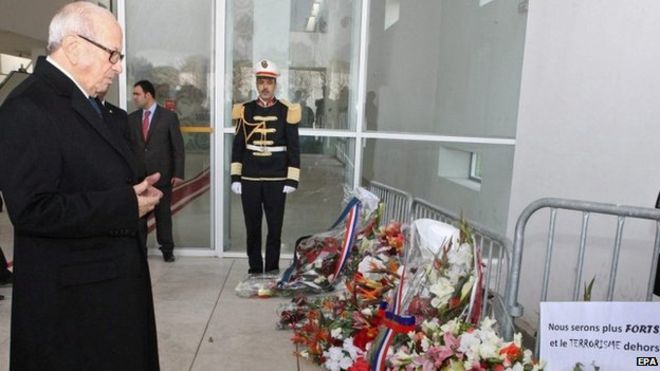 “There were failures” which meant that “the police and intelligence were not systematic enough to ensure the safety of the museum”, Essebsi told the Paris Match weekly in an interview published Saturday.

Twenty-one people, all but one of them foreign tourists, were killed when two gunmen stormed the National Bardo Museum in the capital Tunis on Wednesday.

Essebsi however stressed that the security forces “responded very effectively to quickly put an end to the attack at the Bardo, certainly preventing dozens more deaths if the terrorists had been able to set off their suicide belts”, he was quoted as saying on the Paris Match website.

Deputy speaker Abdelfattah Mourou had told AFP Friday that guards supposed to be protecting the museum and the nearby parliament were having coffee at the time of the assault.

The president’s comments came as Tunisian authorities said there were developments in the investigation.

“There are developments in the case, but to protect the secrecy of the investigation we prefer not to provide any details,” prosecution spokesman Sofiene Sliti told AFP.

However, Interior Minister Mohamed Ali Aroui said “more than 10 people have been arrested for direct or indirect involvement in the attack, among them people who provided logistical support”.

He declined to say whether they included nine people already reported arrested, including the father, sister and two brothers of one of the gunmen police killed in the attack, Jabeur Khachnaoui.

The minister also said, without elaborating, that an arrest warrant had been issued for a Tunisian named Maher Ben Mouldi Kaidi for his suspected involvement in the attack.

A police source and acquaintance of Khachnaoui said the gunman’s four relatives had now been freed, but Aroui would not confirm that.

On Wednesday, the two gunmen targeted tourists visiting the museum, killing 21 people, including a Tunisian policeman.

Doctor Chadli Dziri, chief of surgery at the Charles Nicolle hospital in Tunis, said that of 43 people wounded there were still concerns about the prognosis for one, a Frenchwoman shot in the stomach and the leg.

Dziri said it was clear that many people had been shot as they tried to escape, because they had been hit in the back.

The Islamic State group claimed it was behind the attack and threatened more.

Authorities said the gunmen had trained in neighbouring Libya, where the IS is believed to have training camps.

Tunisia has seen an upsurge in Islamist extremism since the 2011 revolution that ousted dictator Zine El Abidine Ben Ali and sparked the Arab Spring.

The brother of the other gunman, Yassine Laabidi, expressed shock that he was dead, “that he was involved in this; none of us in the family can understand what happened”.

He described Yassine as a “bon vivant” who “enjoyed a drink with mates and would joke around with everyone. He had no complex whatsoever.”

He said Yassine, who had become more of a devout Muslim in recent years, “was brainwashed by swines who send young men to their death in the name of religion”.

Tunisia has taken pride in forming a democratic government and achieving stability since the Arab Spring — in marked contrast to countries such as Egypt and Libya.

But dozens of police and military personnel have been killed in attacks blamed on Islamist militants.