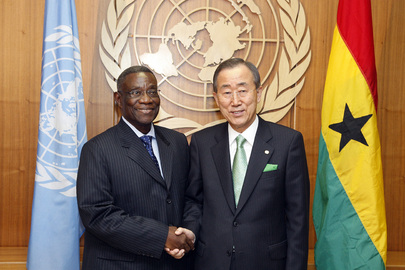 New York, Sept 23, GNA – UN Secretary General Ban Ki-moon has lauded Ghana’s role in the maintenance of world peace by organising peaceful elections and contributing quality troops for UN peacekeeping missions. He also commended President John Atta Mills for his peace efforts, noting in particular his encouragement to Togo to follow the path of peace and ensure that forthcoming elections were free and fair. The Secretary General said this when President Mills, who arrived in New York on Tuesday to attend the 64th Session of the UN General Assembly, called on him at the UN headquarters in New York. Mr Koku Anyidoho, Director of Communications at the Office of the President, told journalists after a close door meeting that the Secretary General noted that the growth of Ghana’s democracy made it a beacon of democratic governance in the sub region and the African continent.

He said the Secretary General commended Brigadier-General Henry Anyidoho, Acting Head of the United Nations Mission in Darfur, for his professionalism.

President Mills said experience had shown that democracy was the path for the nation and that last year’s peaceful election was a result of the collective will of the people.

He said only a stable political environment could enable the government to pursue its programme of building a better Ghana and bring prosperity for all. President Mills will address the world body and hold talks with some of the leaders attending the meeting.