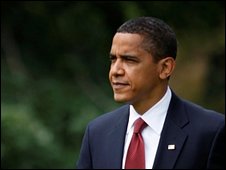 United States president Barack Obama made his first sub-Saharan visit in July this year when he travelled to Ghana.

He did not visit South Africa, but did promise Indepdendent Online readers that he would personally reply to selected questions they posed.

This week he kept his promise… here are the questions and answers:

Q: Mr President, I would like to know what plans you have in place regarding the Zimbabwean president (Robert Mugabe) and the people of his country who are living, or rather surviving, with violence and hunger while their president lives in luxury. Are there plans to assist them financially? – Cape Town resident

A: The US is deeply concerned about the Zimbabwean people, who have suffered for far too long. That is why we are offering direct assistance to the people of Zimbabwe, including hundreds of millions of dollars in food aid, and that assistance will continue. While these measures can provide some relief, ultimately, development depends on good governance that serves the needs of the people, and that is the ingredient that has been missing under President Mugabe. When I met Prime Minister (Morgan) Tsvangirai earlier this year, I announced some $73 million (R567.5m) in additional support for the Zimbabwean people, and the US will continue to explore ways to help without empowering the forces of repression. When the Global Political Agreement is implemented and the civil and political rights of the Zimbabwean people are respected, then we can come forward with even more comprehensive support to help Zimbabwe realise its great potential.

Q: What do you think should be done about African leaders who habitually want to amend their constitution to enable them run for a third term in office? – David Mwanambuyu

A: For Africa to thrive, governments must serve the people – not simply their own power. As I said in Ghana, Africa doesn’t need strongmen, it needs strong institutions. We all know that there is far more to democracy than conducting periodic elections. Strong parliaments, independent judiciaries, honest police forces, a free press, and energised civil societies are all critical for the delivery of sound, accountable governance. Third-term bids that involve tampering with the constitution or worse are steps in the wrong direction. Citizens have a responsibility to resist these efforts, regional leaders have a responsibility to speak out against them, and friends of Africa, like the US, have a responsibility to discourage them as well.

Q: What is your vision in ensuring that Africa is in control of its mineral resources and economic trade and that developed countries invest in ensuring growth and prosperity in Africa? – Jabu Khuluse

A: The US supports development that provides more opportunity for more Africans. Part of that involves promoting good governance, which is critical to attracting investment, ensuring that investors operate responsibly, and managing wealth transparently and effectively. Africa’s resources belong to the people of Africa, but we also have learnt that dependence on commodities – or on a single export – concentrates wealth in the hands of the few. That is why my administration will also encourage diversification of African economies and increased intra-African trade in addition to bolstering trade with the US.

Agriculture is a particular area of promise, and we have launched a $3.5 billion agricultural development initiative aimed at boosting productivity and creating new economic opportunities in this vital sector by helping African farmers develop the tools and capacity to thrive. Meanwhile, wealthy nations like America must open our doors to goods and services from Africa in a meaningful way, while deepening public-private partnerships.

Q: What did you dream of becoming when you were growing up?

A: I hoped to make a difference. My father was a Kenyan student in the US when he and my mother, who was originally from Kansas, met and married. Growing up, I spent several years in Indonesia, then returned to the US to live with my grandparents. As a child, I had great exposure to many different ideas and different cultures. After college, I worked as a community organiser in Chicago trying to help people find jobs, health care, and quality education in a neighbourhood that had been devastated by steel plant closings. Then I went to law school and ultimately decided to seek public office. The best part of my journey has been the opportunity to help people achieve their own dreams.

Q: Do you use Facebook?
A: While I don’t have time to personally update Facebook, I do have a “New Media” team at the White House who helps update information from across my administration on many social network sites – including Facebook, MySpace, Twitter, Flickr and YouTube. The New Media team updates our official White House channels with the latest news, photos, and videos so people across American and around the world can get information quickly and directly, as well as share it with their friends and family.

Q: What thoughts were running through your head just before the results of the presidential election were announced?

A: I felt hope for the future, humility in the responsibility the American people were giving me. I was also focused on the enormous challenges that I knew we would face immediately upon taking office.

Q: Do you think that America is ready for a Hispanic or Asian president following your election to office?

A: Absolutely. America is a land of opportunity for all people – white and black; Hispanic and Asian; Christian, Muslim and Jew. And America has struggled for many generations to live up to the promise of our founding documents, and to extend opportunity to more people – that is why it’s possible for someone like me to become president even though it was hard for an African-American to vote in parts of our country less than fifty years ago.

Dr Martin Luther King’s dream is one that is widely embraced in our country: the dream that the character of a man – or woman – is more important than the colour of their skin. And it is important to remember that America is a melting pot: Americans have roots in every region of the world – many from Africa, like me, but also Latin America, Europe, Asia, and the Arab world. The future of American politics will reflect that diversity, and I believe that our best days are yet to come.