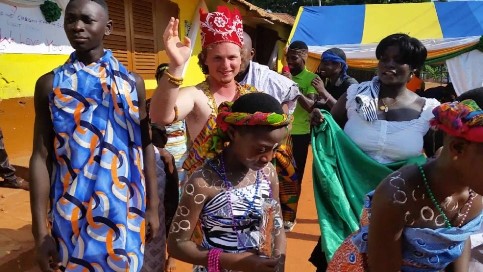 A humanitarian mission to Ghana turned into a royal event for a Kaysville teen.

Wyatt Shapiro, 19-years-old, wanted to something more with his life than other high school graduates.

So last June, he volunteered with the organization International Volunteer Headquarters. He was sent to a small town in southeastern Ghana to help at an orphanage called Potters Village.

“My duties in the morning were to help the kids get ready for school — get them dressed, brush their teeth, wake them up, help them fetch water,” Shapiro said.

The orphanage is home to 127 kids and is led by a woman known as “Mama Jane.”

“Very powerful woman, ” Shapiro said. “What she has accomplished is very amazing.”

Shapiro taught school, played soccer with the kids, and even took care of some medical needs.

“Over the course of my trip, I ended up treating well over 100 cases of malaria,” he said.

As Shapiro grew closer to the kids, he began to notice something.

There was no running water, no TV, no video games to play, but the kids were happy.

“They didn’t feel like they were going without anything,” Shapiro said. “They just kind of accept that whatever happens, happens.”

Right before Shapiro was supposed to go home, the villagers surprised him with a royal ceremony to crown him King of Potters Village.

“They grabbed me, put me on their shoulders and they walked me, singing and dancing and chanting, all the way back to the orphanage,” he said. “All the while pouring baby powder on my head.”

They gave him a crown, a scepter, and a special name.

Shapiro also made an oath as the new king.

Shapiro now spends his time talking to others about Potters Village through speaking engagements across the valley.

“These kids deserve opportunities because they will take advantage of them.”

He is also spreading the word through his mother’s nonprofit organization, “Smile for Mom,” to help raise funds and awareness.

Shapiro hopes to return to Ghana in May.