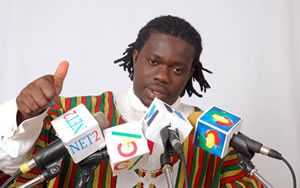 Ace musician Kwabena Obour on Wednesday took his ‘music train’ to the seat of government to enlist the support of Vice President John Mahama in a literacy campaign aimed at inculcating reading habits in the youth.

With the aid of a laptop computer, the hiplife singer, popularly called “President Obour”, played compositions of the campaign dubbed “Ghana Reads” to the Vice President at the Castle, Osu. The compositions, which feature a popular comedian and an actor Agya Koo, are a medley of earlier versions of Obour’s advocacy campaign. However, this time around, it employs a school setting as the backdrop to accentuate the fundamental nature of reading in the making of a successful citizen.

The autographical line, “Meka (I will say it), me Kwabena Bour meka”, is heavily felt in the rendition as Obour positions himself as a linguist to advocate the importance of education to holistic development to his subjects.

Receiving the star, Vice President Mahama commended Obour for using his artistic endeavours in promoting peace and academic development among the youth and assured him his support.

The Vice President said he supported the project because it seeks to instil literacy habits in the youth, who have almost completely abandoned the knack of reading, in preference of pastimes such as video viewing and playing cyber games.

He noted that such attitudes were wrong and that nations must be built on the basis of ideas and knowledge and not merely through amusement pursuits.

Vice President Mahama was sad that the contemporary Ghanaian student read purposely for examinations, thus acquiring little or no pedagogy beyond his chosen field of study.

He said a manifestation of this state of affair was the near desertion of public libraries except during examination periods. Rather, he said, it was time the youth acknowledged the fact that success in life, especially in the public sphere, hinged largely on being a fervent learner, who is willing to expand his mind so as to broaden possibilities in life.

Obour said in addition to whipping up public interest about the importance of literacy, the campaign also intended to establish 10 community libraries. He said over the next one year, he intended to engage school authorities in forming reading clubs and encourage the establishment of more libraries nationwide.