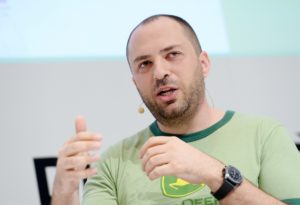 The co-founder and CEO of WhatsApp has spoken out against the ruling of a single Brazilian judge that blocked the app in Brazil for 100 million people for the second time in six months, saying he wouldn’t back down on keeping messages on the network encrypted.

“Yet again millions of innocent Brazilians are being punished because a court wants WhatsApp to turn over information we repeatedly said we don’t have,” Jan Koum said on Facebook FB +0.89% last night. “When you send an end-to-end encrypted message, no one else can read it – not even us.”

On Monday WhatsApp was made inaccessible for its roughly 100 million users in Brazil — around half the country’s population — after cellular providers blocked access for the second time this year.

A Brazilian state judge had ordered them to comply or face a fine of 500,000 Brazilian reals ($143,000) per day. The order, which comes in response to an ongoing drug-trafficking case in state court, is meant to stay in place for 72 hours, or three days.

When WhatsApp faced its first, 48-hour blockade in Brazil last December, an appeals court quickly overturned the ruling to make the app accessible to local users.

Koum, who founded WhatsApp in 2009 before selling it to Facebook for $22 billion in 2014, said the company was working to get WhatsApp restored once more. Facebook is likely to launch another appeal, though it’s unclear if it will be as successful as it was last time.

The judge who gave the order, Marcel Maia Montalvo, also previously ordered the arrest of a Facebook executive overseeing operations in Latin America in March, over the same case. Facebook’s Diego Dzodan was held in custody for a day before the order was once again overturned.

Blocking WhatsApp will have a major impact on the lives of ordinary Brazilians. The app is installed on 91% of all Android devices in the country, according to market research firm Similar Web, and its citizens spend just over 1 hour per day on it on average.

WhatsApp’s continuing dispute with Brazilian authorities is part of a wider war between technology companies and governments over data encryption.

Koum, who was born in the Soviet Union and has spoken out against the dangers of government surveillance, recently oversaw a complete roll-out of end-to-end encryption on WhatsApp’s entire network, which compromises 1 billion active users.

On the issue of encryption Koum has said that people “deserve security. It makes it possible for us to connect with our loved ones. It gives us the confidence to speak our minds.”