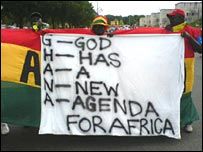 They say that you shouldn’t go into crack cocaine because you might never come back. Unfortunately, for some Ghanaians in diaspora–the diasporian experience has become an experience similar to an addictive drug. Some of them seem to be hooked from their heads all the way down to their toes. I don’t know how many of you out there have ever lived with an addict. See, I have a cousin, who has been struggling with alcohol abuse for sometime now. To tell the truth, he doesn’t like to drink. He hates it, at least, this is what he tells me. Ironically, he cannot seem to quit try as he may. I don’t know what moves him to drink. Perhaps, it might be all the years of alcohol abuse, which has slowly evolved into a habit to hard to quit. Mind you, he started drinking quite early on in life. Therefore, this might help explain why quitting has become such a battle of will. He, needless to say, tried to quit when he first moved in with me. He, actually, went months on end without drinking to my surprise. I don’t what happened. All of a sudden, he resorted back to his old ways. He started drinking like never before. I confronted him on numerous occasions to his frustration and anger. His only reply to me was: “Leave me alone– I am an alcoholic.” “I tried to quit to follow your example, but I just can’t follow through.”I told him, look; quit drinking for yourself–not for me. Quite astonishingly, he came up with all kinds of lame excuses for resuming his habit. He told me that one of the reasons why he decided to drink again was because of loneliness.”You know how lonely it gets here in Holland” he said. “The indoor life makes one want to drink.” “There is no happiness here.” “You only work and work.” “Therefore, I have to create my own happiness, you understand?” I asked him; how good is happiness, when it comes at the expense of your health? We are all going to die is what he told me. He made up his mind that he wasn’t going to stop drinking. I made up my mind that I was not going put up with his bulls**t. So, I kicked him out. He went and got his own place days later. By now, you might wondering what my cousin’s story has got to do with diasporian Ghanaians, aren’t you? Well, a whole lot if I may say. You see, I have heard some diasporian Ghanaians tell me how much they would like to resettle back home. In return, I would ask them; what’s holding them back? The reasons and excuses, which most of them give, leave me baffled for days. Some of them would tell me that they would like to move back home, but the environment isn’t conducive enough for them.Others would tell me how they feel un-welcomed in Ghana, whenever they go on a visit. Hence, their decision to stay where-ever they are. Just the other day, a fellow told me that a move to Ghana would be an act of economic suicide. According to this fellow, the political scene in Ghana is very disheartening, to say the least. As a result, he wouldn’t dare leave his host country for Ghana. It seems to me that some diasporian Ghanaians are prepared to come up with all kinds of excuse to stay where-ever they are. Simply because; they have created a life of comfort for themselves and their children in their host countries. They have their 9-5 jobs, which reward them with a salary each month. They have their churches, which have become more like a family gathering. Those unemployed have access to government social benefits. Therefore, you could imagine why a move to Ghana isn’t attractive to some of them. After all, Ghana doesn’t have all these goodies. So, it’s better that they stay where-ever they are. Perhaps, we should give them the benefit of the doubt, for they might be right.But, what if all these reasons, which have been given thus far, is just an excuse to remain addicted to a life of ease and comfort in one’s host country? Remember, an addict would move heaven and earth to justify his/her decision to keep up a habit. See, we need to be more honest with ourselves. As the saying goes; where there’s a will–there’s a way. We cannot afford to use our strength and expertise to help build another man’s country to the detriment of our own. Also, we shouldn’t expect the petty remittances, which we send every now then, to solve our long term economic problems. Remittances, which some would consider to be another form of welfare, cannot build a nation. Time and history have both proven this to be true. Ghana’s future lies in the hands of her diasporian children. The question, therefore, remains; when are they coming home to help build their own country with their acquired knowledge and skills? If they cannot trade their lives of ease and comfort for sacrifice–then I am afraid that their children’s children would wind up cursing them somebody. Please, let’s remember what the Germans did to the Jews to advise ourselves.