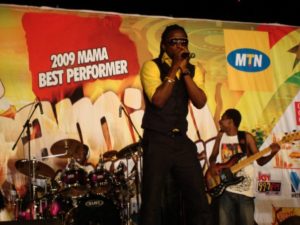 If ever there were doubters as to why Samini won MTV Africaâ€™s best performer 2009, all soot and cobwebs of doubts were cleared in the minds of music lovers, Saturday when Saminiâ€™s â€˜Experience Ghana Tourâ€™ ended at the Ohene Djan Sports Stadium.

For well over three hours, Samini took the stage by storm and served one of the most delectable performances ever seen and set fans agog.

Never mind. The fans had already gone through a marathon night of singing and dancing to hits from Ghanaâ€™s finest rappers yet they showed little or no sign of exhaustion as Samini took over. And there they were, they shook every muscle, strained every accent and some even â€˜lost their minds.â€™

From â€˜Lindaâ€™ right down to â€˜Movementâ€™, interspersed with creative ad-libs and legendary Bob Marley tracks, Samini, could not have had a better theme for his Ghana tour which is â€˜a sense of achievement.’

What a night it was! Every single artiste who mounted the stage on the night was phenomenal.

Kwao Kese was at his â€˜madâ€™ best. Starting with an unusual 10 push-ups, the king of the streets was fired up and treated fans to his popular tunes and his carefree comments or raps which left them cracking their ribs in laughter and sometimes left their jaws opened, and tongues stuck to the roofs of their mouths in complete surprise. Democracy he called it.

Obrafuor was exceptional. He carried the crowd along this time and served fans with his amazing selection of hits and his controversial Nkasiebo.

Stage craft has never been lost on VIP and they lived up to expectation. R2Bees, Sammy B, Konfi, and several other artistes made Saminiâ€™s final experience tour a memorable one.