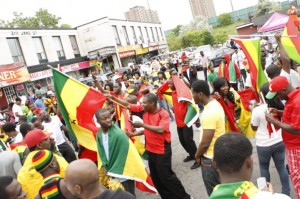 The Ghana Black Stars’ triumphant win over the national side of Serbia last Sunday triggered a wild celebration among Ghanaians resident in Toronto in the Ontario province of Canada and other communities in the country.

The victory over Serbia has perhaps presented the best answer yet to questions regarding the Stars’ form before the match, especially those who doubted that without Michael Essien the team was not going to go far.

Prior to the day of the match, many people were heard in the talking about the game that was going to be played by the Stars and the arrangement they have made awaiting the celebration of the win.

Whiles the match was ongoing, the whole of Etobicoke city which is much dominated by Ghanaians was dead silent as residents were locked up in their rooms watching the match and praying for the Stars to triumph over their Serbian counterparts.

Church attendance was slightly affected as a chunk of members decided to stay home and watch the match live due to the hour difference which made the kick-off time 10:00 a.m. clash with worshiping hours. 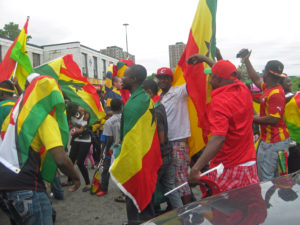 Even for those who defied the odds and went to church, this reporter learnt they were every minute spotted checking the scoreline on their from time to time.

Really when the penalty kick was converted by the ubiquitous Asamoah Gyan, a roaring or deafening shout of â€œgoalllllllllllllâ€ could be heard everywhere. Screams of â€œGhana oooooooâ€ could be heard from neighboring Ghanaians’ rooms in apartments.

The jubilation started immediately the referee blew his whistle to bring the match to an end and Ghanaians started to pour out onto the streets to start their celebration amidst singing, clapping, beating drums, tooting their car horns and anything to show excitement.

Patriotic citizens here showed how much they loved their beloved country by mounting giant Red, Gold, and Green with the Black Star in the middle flags on their cars and started to go on picnic.

Others also draped in the national colours, wore replica jerseys or anything bearing the true colours of Ghana to conspicuously indicate their support for the national team. 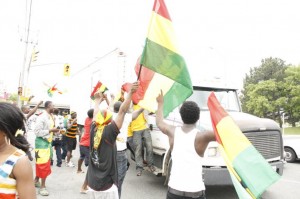 The jubilation became wild when news went round like a wild fire that some members of the Ghanaian community had gathered at PANAFEST Restaurant close to India Africa Grocery Shop at Jane and Wilson for the celebration.

Within a twinkle of an eye thousands of Ghanaians dressed in the national colours thronged the area to dance to songs provided by special DJs to the satisfaction of all. Because the day was Sunday and members would be going to work the next day, the celebration was cut short after 7:00 p.m. But they vowed to go on a bigger picnic come this Saturday after the Stars have given them their second win over the Australians.

Several weeks before the kick-off of the World Cup tournament, foreign nationals’ resident in Canada were seen mounting the flags of their home countries on their cars and buildings.