For the first time in the annals of the Sports Writers Association of Ghana (SWAG) awards, the honours for the Footballer of the Year is set to overshadow the topmost Sports Personality of the Year award which will be received by the â€˜Fresh Kingâ€™ Joseph Agbeko.
Scheduled for the Round Pavillion of the Ghana International Trade Fair Centre on Saturday, the award which was presented to Black Stars deputy captain, John Mensah last year will have three contenders vying for the prestigious footballer of the year award. 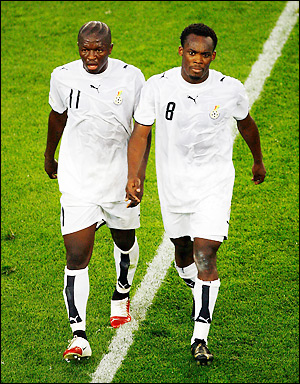 Interestingly, the three, Michael Essien, Sulley Ali Muntari and Laryea Kingston, all members of the senior national football team all stand in a very good position to win.

For Laryea Kingston, his nomination for this yearâ€™s award is the closest he has come to joining the SWAG award receipients.

But in doing so, he faces very stiff opposition from Essien and Muntari whose contribution to the nationâ€™s third placed success in the 28th African Cup of Nations hosted by Ghana cannot be underestimated.

Equally, Essien and Muntari have contributed immensely to the success of the team and what could swing the tide in their favour is their exploits in their respective leagues abroad.

In the English Premiership, Essien is known as one of the formidable performers plying his trade with Felippe Scolariâ€™s Chelsea and in the face of tough challenges posed by equally good players like Germanyâ€™s Michael Ballack, Joe Cole and Frank Lampard and new import, Deco, he managed to command a regular position until injury ruled him out of action when on duty for Ghana against Libya in a World Cup qualifier.

Essienâ€™s biggest plus remains his participation in the Champions League final between Chelsea and Manchester United in Russia in May this year.

Although they ended up losers, his role to mark out Portugalâ€™s Cristiano Ronaldo, which he did to perfection in the second half, established his status as one of the best midfielders in the world.

Kingstonâ€™s exploits in the Scottish league with Hearts often passes without notice as a result of the little media hype it enjoys but irrespective of how one looks at it, he plays a key role in their challenge for the scottish premiership title.

Aside a sterling performance in the CAN 2008 where he is remembered with his late corker that gave Ghana a 2-1 victory over Guinea in the opening match, Muntari will ride on his success in the premiership where he scored vital goals for Portsmouth including his penalty strike that earned the Pompey side the FA Cup for the first time in many years.

That show attracted the attention of top soccer managers including the â€˜Special Oneâ€™, Jose Mourinho who succeeded in luring him to Serie â€˜Aâ€™ side, Internazionale (Inter) where he currently plays in the first team.

It will be a closely fought contest between three great, tried and tested players but only one will take the award home, who that person will be remains the question to be answered on Saturday.

History will be made on the night when for the first time, the Coach and Team of the year awards are bestowed on the National Paralympic team and their head coach, Armtrong Aidoo for their exploits including the Afraican Cup of Nations conquest in Sierra Leone.

Ransford Osei will mount the podium to receive the Promising Player of the year award while Moussa Narry, now with Auxerre of France receives the Discovery of the Year award for his achievement including his African Champions League feat with Etoile du Sahel of Tunisia and his subsequent invitation into the national team.

Ajara Mohammed will be awarded the Female Athlete of the Year, Dedication and Valour award goes to John Ainoo of Sekondi Hasaacas with Ataa Eddy Pappoe, a boxing referee and judge receives a Meritorious Award.

In addition to the Sports Personality award, Joseph Agbeko will be presented with the Professional Boxer of the year award with others like Joseph Appiah and Mirable Lamptey, Rosina Lomo and Afful Williams set to take home the Hockey Players in male and female categories, Handball Player and Cyclist of the year awards.