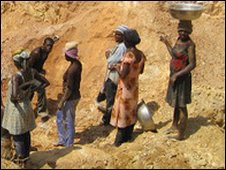 At least 15 people working in an illegal gold mine in western Ghana were killed when the mine collapsed.

Thirteen of those who died in the privately owned gold mine in Dompoase town were women, police told the BBC.

The accident, which officials described as the country’s worst mining disaster, happened on Tuesday when about 30 people were working in the mine.

Police have said they fear that more bodies will be recovered from the collapsed mine.

“The government must take measures to control the activities of miners,” he added.

The BBC’s Casper Leighton in the capital, Accra, says Ghana has large gold reserves and alongside the multinational mining companies, locals dig pits in the hopes of striking gold themselves.

Safety measures are poor or nonexistent, he says.

While men generally do the digging it is often women who carry out the soil for sorting.

Police say they are looking into the possibility of criminal negligence but that the owner of the mine was one of those killed.