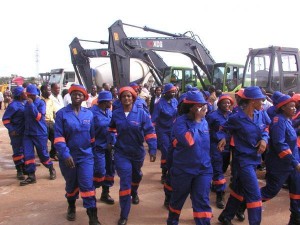 Aug. 12, GNA – The Government has tasked Ziol Company, a subsidiary company of the Zoomlion Ghana Limited, to recruit the youth in communities where oil has been discovered in preparation for extraction of crude oil in the country next year. Mr. Francis Kojo Arthur, Member of Parliament (MP) for Gomoa West, announced this at the launch of the District Employment Taskforce (DELTA Force) at Apam on Monday.

He said the youth, who would be recruited mainly along the coastal towns, are to be engaged in cleaning the beaches and in the restoration of the coastal vegetation. Others would also be trained to take care of oil spillage.

The MP said the government was making every effort to increase job opportunities for the youth and appealed to them to make good use of the opportunities.

Dr Nii Moi Thompson, an Economic Development expert and representative of the International Labour Organisation (ILO), said creating employment meant minimizing anti-social activities such as armed robbery, cyber crimes or “Sakawa”, rape and defilement. He said 80 per cent of the Ghanaian economy was being controlled by the informal or private sector and out of this women formed 90 per cent. Dr Thompson said ILO had been supporting the expansion of the private sector because of its importance to the economy. He urged Ghanaians to be time conscious, quoting the adage that “time is money”. Mr. Patrice Caesar-Sowah, National Project Expert of the ILO, said the organization was concerned about employers creating an enabling and decent environment for their workers to motivate them to expand productivity.

He said the DELTA force would be engaged in the registration of the unemployed and identification of job opportunities in the district. Mr. Caesar-Sowa appealed to chiefs and land owners to release lands for the Force, and appealed to the District Assembly to sustain the programme.

He expressed concern about the attitude of some employees of Zoomlion under the National Youth Employment Programme who did little or no work at all but received pay monthly. “I shall keep a keen eye on you and those found to be lazy, shall be weeded out,” the DCE warned. He assured the ILO experts that the Assembly had already put in place measures to sustain the programme. They include the creation of an office and the appointment of a desk officer. An eight-member DELTA force, under the chairmanship of the DCE was inaugurated at the ceremony. 12 Aug 09