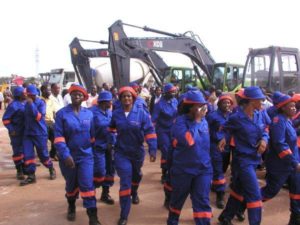 Winneba (C/R), April 18, GNA – The youth in the Western Region have been entreated to take advantage of the oil find to acquire the technical know-how to make them relevant on the petroleum job market. Mr Paul Evans Aidoo, Western Regional Minister, said there were two tertiary institutions in the region and there was the need to build their knowledge in petrol-chemical sciences to handle the jobs that could come with the oil discovery.The Regional Minister said this at the inauguration of the Western Regional Students’ Union (WERSU) of the University of Education, Winneba, on Saturday. The theme for the inauguration was; “Development through Unity and Education”.Mr Aidoo asked the people to ensure that “their expectation on the oil does not exceed the reality, while as a government we would endeavour to ensure that our people reap the benefits of the industry”. He called on the people to join hands in the fight against the degradation of the forest and rivers by both the activities of illegal miners “galamsey” and the mining companies who were sometimes reckless.Mr Joseph Boahene Aidoo, a former Western Regional Minister, said the Western Region produced greater percentage of the nations’ wealth but lacked social amenities to improve the lot of the people. According to him, less than two percent of the total length of the region’s 6,000 kilometers of feeder roads had been tarred. He said the development of the region was the responsibility of the people and urged the chiefs and opinion leaders to come together towards its development.Mr Aidoo expressed regret that most children in the region between the ages of eight and 16 years had abandoned their education and were engaging in “galamsey”.He said apart from running counter to the country’s labour laws, this phenomenon had the potential of ruining the lives of a whole generation in the region and called on the chiefs and people to help curb it.Mr Eric Senkye, President of the Union, appealed to district assemblies to provide the union with computers to enhance its work. He said the union was formed to foster unity among students to garner the necessary support for the development of the area. Mrs Lily Adams, Vice Dean of Students Affairs of the University, who chaired the function, entreated the students to use their academic skills to educate the people to take education seriously