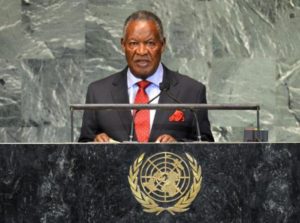 Lusaka (AFP) – The body of president Michael Sata arrived back on Zambian soil on Saturday, ahead of a state funeral for the 77-year-old leader.

Sata’s body was then driven to Lusaka’s Mulungushi International Conference Centre, where it will lie in state before the funeral.

For months, officials in the southern African nation repeatedly denied that Sata was sick, despite several trips abroad for medical help.

Fresh elections to pick a new president must be held within three months after Sata’s death. Scott is not expected to run.

The public will be allowed to view the body from Sunday until November 9, and parliament will host a thanksgiving ceremony on November 10.

Books of condolences have been opened at government offices in the capital, in the provinces and at Zambian embassies abroad.

On November 11 Sata will be buried at Embassy Park cemetery, near government offices in Lusaka’s Long Acres suburb.

The graveyard is reserved for heads of state and two of Zambia’s former leaders — Frederick Chiluba and Levy Mwanawasa — are buried there.