By Edmund Agbeko and Jonathan Baah Annobil, Vaughan, ON

It was all joy for eighteen year old Miss Zipporah Prempeh at the end of the Miss Ghanaian Canadian beauty pageant, at the City Play House Theatre in Vaughan, Ontario, where she was deservedly crowned the beauty queen of the night, by putting up at 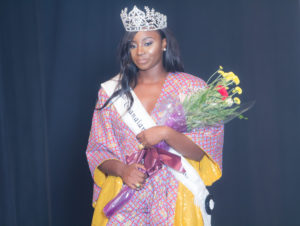 tention-grabbing performances to be named Miss Ghanaian Canadian 2016. The colourful event which was hosted by MC Hilly and MC Ebone, ended up with Zipporah Prempeh beating six [6] other beautiful contestants to the top-most award. Zipporah was at her enchanting best at the well attended event which also had in attendance, the Consul General of Ghana in Toronto, Mr. John Bosco Dery-Kpebesani and other senior representatives from Money Gram and Ethiopian Airlines, the main sponsors of the event.

The event which kick-started with an unforgettable rendition of the national anthems of Ghana and Canada respectively by Bella Tee was evidently one of the many highlights of the colourful event, in which Miss Zipporah Prempeh’s enactments on the night, also won her the Miss Humanitarian, Miss Photogenic, Miss Congeniality and Miss Social awards, as Barbara Akua Sam and Sikina Musa-Mclean won Miss Swim Wear and Miss Talent awards respectively; with Misses Ama Adobea Ampofo, Elizabeth Adjei Twumasi, Rebecca Panford and Nana Yaa Ankomaah summing up the other contestants.

The ladies who engaged themselves in an exigent but healthy competition treated patriots on the night to various contests in Swim Wear, Traditional Wear, Talent Exhibitions and many other competitions in their quest to win the first Miss Ghanaian Canadian 2016 honour. The almost sold out event did leave up to its billing as the audience were treated to brilliant cultural displays by the Ubuntu musical group and an energetic stage performance from talented musicians, Slimflex and Freeman Nadwo amongst other outstanding acts on the night.

Speaking to the Ghanaian New after the event, the beauty pageant committee president, Mr. Emmanuel Ayiku hailed the finalist for this year’s pageant as ‘outstanding’ and was optimistic of the event reaching greater heights come next year. He said: “I must admit we as a team are pleased with the talents of this year’s finalist for the pageant. We are hopeful of better things to come when we organise the next one but above all, everything has been worth-nothing and we want to thank all sponsors for coming on board to make this a success.”