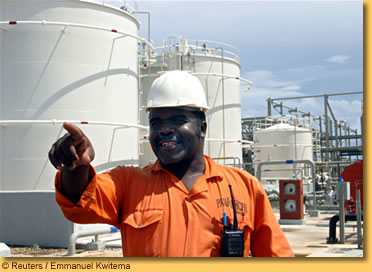 Ghana has bought the land on which it plans to build a $1.2 billion gas-processing plant near its border with the Ivory Coast, the Daily Graphic reported.

The land was acquired after the government resolved concerns of the residents of Bonyere, where the plant will be built, the Accra-based daily said, citing Deputy Information Minister Samuel Okudzeto Ablakwa.

Once built, the plant will be able process 300 million cubic feet of gas a day from Ghanaâ€™s offshore Jubilee oilfield, which began production on Dec. 15.
Earlier this year the China Development Bank agreed to lend Ghana $3 billion for the gas plant and an alumina refinery in Western Region.